Hearing Continued for Man Charged in California Homicide by Vehicle 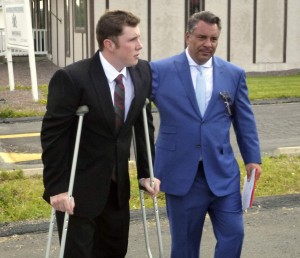 CENTERVILLE, PA – A preliminary hearing was postponed Thursday for a Mon Valley man to allow his attorney to negotiate an outcome with the Washington County District attorney’s office in the vehicular homicide case that resulted in the death of his friend.

District Judge Joshua Kanalis continued the preliminary hearing to Aug. 22 for Quinton Dean Shaner, 21, of Elizabeth, who has been free on $100,000 unsecured bond since he was arraigned May 11 in the death of Mason Rauff of Lancaster County, court records show.

Shaner and Rauff, 21, were students at California University of Pennsylvania at the time of the Nov. 2 crash on Route 88 in California.

Shrager said he also wants time to discuss the charges with Rauff’s family, saying they want the case to be resolved.

He said the case did not involve willful disregard for life, and that his client wasn’t drunk or on drugs when he lost control of a car on a bend and it struck a hillside before rolling over several times.

Borough police also accuse Shaner of reckless endangerment and driving as fast as 95 mph before he crashed the car. Two other Cal U. students were injured.

Hearing Continued in Crash that Killed Cal U Student 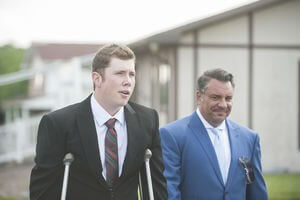 that killed a California University of Pennsylvania student.

Quinton Dean Shaner, 21, of Elizabeth was charged in the crash, which police said was caused by high speeds. Passenger Mason Michael Reiff, 21, of Denver in Lancaster County was killed in the accident Nov. 2.

Shaner left the scheduled hearing at Magisterial District Judge Joshua P. Kanalis’ office on crutches. He suffered a “massive leg injury” in the crash on Highpoint Drive, according to police.

Two other passengers were also injured in the crash. All four occupants were Cal U students.

One of the surviving passengers told police Reiff asked Shaner to slow down before he lost control of the car on sharp turn and rolled multiple times.

Shrager said that speeding does not constitute a willful disregard for life, adding that Shaner was not under the influence of anything while he was driving.