The Indiana Gazette
by CHAUNCEY ROSS chauncey@indianagazette.net
December 17, 2016 10:59 AM

Three Clymer-area men were ordered Friday to stand trial for the robbery and savage slayings of a man and woman in their Cherryhill Township townhouse almost two months ago, as the district attorney introduced new evidence that purportedly shows the trio plotted the murders. 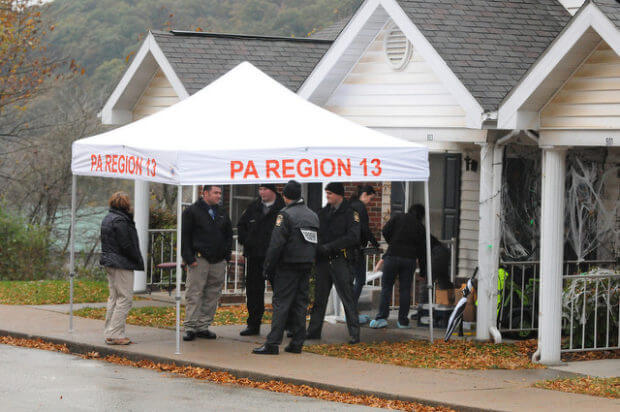 Scene of a double homicide at 903 Hillside Drive just outside of Clymer along route 403.

The suspects, Isaiah Scott, 17; Justin Stevenson, 19; and Nathanial Price, 18, were held over for prosecution following their preliminary hearings before District Judge George Thachik in the Indiana County Court House.

Each is charged with two counts of criminal homicide for the brutal attacks on Timothy Gardner, 26, and Jacqueline Brink, 20, during a robbery early Oct. 27 in their home at 903 Hillside Drive near Clymer.

Stevenson and Price also are charged with robbery in the theft of a safe from the residence. Thachik dismissed a robbery count that had been filed against Scott after his attorney, public defender Jennifer Szalkowski, argued that testimony showed Scott fled from the apartment before any of the suspects went near the safe.

But Thachik refused to dismiss charges that Scott and the others had conspired to rob Gardner and Brink as they drove there in Price’s car.

State police Trooper John McCombie, the lead investigator in the case, testified that he obtained Scott and Price’s cellphone records under a court order and found their exchange of text messages in the hours leading up to their visit to the townhouse.

A transcript of the text messages, read aloud in court, provided a view of the case that wasn’t available when the suspects were first arrested.

In the messages, Scott told Price he was waiting for his older sister to go to sleep so he could get out of the house and meet up with him, McCombie said.

“I got some real (expletive) going down tonight, I need you to ride with me.”

Scott texted back at 10 p.m.: “I’m ready. My sis ain’t in bed yet. Be patient, I promise. We will get it done tonight. This is not my first rodeo.”

Szalkowski told Thachik that the text messages had nothing to do with a robbery when she asked the judge to dismiss the case.

Price’s defense attorney, Thomas Dickey, of Altoona, strenuously objected to the messages and challenged their meaning.

First, he said it hadn’t been proved that Scott and Price themselves actually typed and sent the messages.

In response, District Attorney Patrick Dougherty asked McCombie whether Scott or Price had said anyone else used their cellphones.

No, they hadn’t, McCombie said.

Dickey then suggested that the slang phrases in the messages were drug lingo.

In cross examination by Dickey, McCombie acknowledged that some people refer to LSD as “acid,” and that those familiar with drug activity often say “people drop acid.”

The preliminary hearings were moved from the Clymer District Court to the Indiana County Court House, in part because of greater security but also to accommodate an audience of more than 45 spectators in Courtroom No. 1. Many were family and friends of each of the suspects, and a sizable group of relatives and friends of the victims listened through almost three hours of testimony.

That group applauded when Thachik upheld the charges at the end of the third hearing; one of the spectators shouted out, “Praise the Lord.”

McCombie literally recited most of his testimony three times as each defendant had an exclusive hearing. The suspects were kept sequestered — none was present during the others’ hearings.

None of them were called to testify.

Indiana County Coroner Jerry Overman Jr. testified only twice, as Stevenson’s defense attorney, David Shrager, of Pittsburgh, agreed without objection that Gardner and Brink were victims of criminal homicide, and excused Overman from having to testify to those facts.

Overman said autopsies showed the cause of death for both Gardner and Brink was exsanguination, meaning loss of blood. Gardner suffered six or seven sharp force injuries to his neck and a few blunt force objects to his thoracic area.

In McCombie’s three trips to the witness stand, he recounted the findings that are the basis for the criminal complaints filed against Scott, Stevenson and Price just hours after the killings.

McCombie said Gardner’s next-door neighbor, Michael Pritt, had phoned 911 to report the disturbance on the other side of the wall in Gardner’s townhouse and told police he briefly talked with one of the suspects as he left the apartment. Another neighbor identified the suspect as Scott, and troopers soon picked up Scott at his home along Franklin Street in Clymer.

Scott told investigators that he, Stevenson and Price went to the townhouse to buy drugs, but according to McCombie, Scott claimed to be a friend of Gardner and that he was present “as a buffer” between Gardner and the others, to facilitate a drug transaction.

At the time, Scott was a star running back for the Penns Manor Comets high school football team.

Scott told investigators that Gardner was given some money, then went upstairs and returned to the first floor, where Stevenson hit Gardner with a pipe that police later determined was a breaker bar, according to McCombie’s testimony.

McCombie said Scott told first investigators that when the fight began, he left the apartment, saw Pritt, then ran to his home. But in a later interview, McCombie said, Scott recanted his story and said he returned to Price’s car in a parking lot at the former Whipstock plant, and waited for the others to return.

McCombie said Stevenson and Price generally told the same story after troopers arrested and brought them to the barracks for questioning.

Both said the group entered Gardner’s apartment and paid him for drugs, then Stevenson attacked Gardner with the breaker bar after he went upstairs and returned to the living room.

McCombie said both also testified that Stevenson was poised to hit Gardner a second time but struck Price’s head with the bar on his backswing, and that Price then fell onto Gardner.

Shrager made clear in cross-examination that his client, Stevenson, was leveling with police.

“Did he indicate his intention to harm him?” Shrager asked.

“He indicated that he planned to strike Mr. Gardner,” McCombie answered.

“Did he have an intent to murder?” Shrager asked.

“His plan was to incapacitate Mr. Gardner,” said McCombie.

“But was his plan to kill?” Shrager asked again.

“No, sir, he didn’t indicate that,” McCombie replied.

But Stevenson and Price gave different stories about what happened to Jackie Brink, McCombie said.

Stevenson said that after Price fell on Gardner, he went to the upstairs bedroom, told Brink he wouldn’t hurt her, took a safe from the room and carried it downstairs, according to McCombie. He said Stevenson claimed that he left with the safe then returned to get Price to leave.

Price, on the other hand, told police that he was rendered woozy when Stevenson hit him with the breaker bar, McCombie said.

“Price said Stevenson freaked out and ran upstairs, and threw the safe down the stairs,” McCombie testified. “He said Stevenson was in a confrontation with Jackie Brink, then came downstairs and they exited in his own black Dodge Dart.”

Two children, ages 3 and 1, were left unharmed in the apartment. Gardner was their father.

Price’s hearing was more drawn out than the others as his attorney, Dickey, objected to Overman quoting from a pathologist’s report, calling it hearsay, and meticulously cross-examined Overman and McCombie to verify many minute details of the investigation.

Dickey said following the hearing that Price being hit by Stevenson would be “a very important part of the case.”

After each defense attorney closed by asking Thachik to dismiss some or all of the charges, Dougherty told the judge that the sum of the evidence supported all the charges.

“The text messages speak for themselves,” Dougherty said. “These three made a plan to commit robbery, they stole a safe … in totality, we have a case on each charge.”

All the suspects were returned to Indiana County Jail, where they have been held without bond since their arrests.

Szalkowski said afterward that she agreed with Dickey that the text messages unveiled Thursday were indicators of drug activity, and said Scott’s outing with the others was supposed to be his first-ever venture into the use of LSD.

Szalkowski also said the evidence shows that Scott was less involved in the deaths than Stevenson and Price, but she wouldn’t guess whether the DA’s office might offer him a plea deal.

“He doesn’t have the information that they want, the facts that would help them,” Szalkowski said. “That is, what happened to Jackie Brink.”

Scott, who will turn 18 in March, is being prosecuted as an adult.