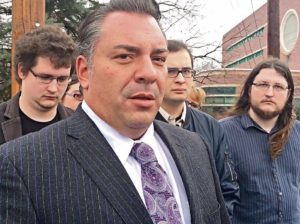 The letter, written by forensic pathologist Dr. Todd M. Luckasevic, became part of the court record yesterday during the preliminary hearing for Dean Richard Craven, 27 of Shenango Township. Craven is accused of stabbing his mother to death with a sharpened screwdriver the morning of Jan. 29 at her Neshannock Township home.

District Judge Jerry G. Cartwright ruled that all charges against Craven — criminal homicide, aggravated assault and having prohibited offensive weapons — be bound over to the Lawrence County Court of Common Pleas.

Craven remains in the Lawrence County jail without bond.

About 10 of his family members and friends assembled in the courtroom to hear the testimony of two state troopers involved in the investigation of Lauri Craven’s death that Sunday. Pittsburgh attorney David J. Shrager, defense counsel for Dean Craven, said after the proceeding that the group was at the hearing to support the suspect, whom he said had a lifetime of verbal and mental abuse by his mother.

Testimony of state Trooper Randolph Guy was that Craven had said in a recorded interview that he had planned his mother’s murder and his suicide, and that she had mentally abused him since he was a child.

Craven is accused of killing his 57-year-old mother, then trying to kill himself by various means, including trying to electrocute himself in her bathtub with a plugged-in toaster. He also allegedly tried to cut his wrists after the toaster attempt failed. He allegedly told investigating state troopers during an interview that when he didn’t succeed in his own suicide, he called his sister and asked her to take him a gun to kill himself because he had killed their mother. He then called 911.

Guy told the court, based on the interview with Craven, that he suspected his mother had killed his cats, and “it upset him greatly. It was one of the things that caused him to formulate this plan to kill his mother, according to him,” Guy told the court.

Craven also said in the police interview that his mother was making him a cup of tea when he tried to stun her in the neck with a stun gun before killing her, Guy testified.

Craven told troopers in the same video- and audio-recorded interview that when he was 5 years old, his mother had tried to get him to commit suicide by cutting himself, according to Guy’s testimony.

He described Craven’s behavior as calm during the interview, saying that he didn’t show any signs of sadness or distress.

“He acted like he was telling a story that didn’t involve somebody being murdered,” Guy told the court. He said Craven was fully cooperative and didn’t try to minimize what happened, nor was he deceptive.

Guy said that type of behavior is uncommon with most crime suspects, as “typically, they will try to use deception and minimize their culpability in a crime.”

The alleged mental illness of Craven and his mother were the focus of Shrager’s comments following Craven’s preliminary hearing. Addressing media outside of the court, he said that Craven’s family and friends attended the hearing “because they care about Dean. They understand what happened here … they understand that Dean is not an evil human being. Dean suffers from mental illness, and he has from childhood, as did his mother, as we heard in the testimony today.

“Mental illness is something that is treated very poorly in our country right now and we’re starting to improve,” Shrager continued. “But mental illness is the same as having diabetes or cancer, and people need to understand that.

“This case is complicated,” Shrager said. “This is not a person who went out and robbed a bank and shot somebody on the way out. He’s got pretty severe mental illness, and he’s been subjugated to living with someone who’s got severe mental illness that contributed to his mental illness. And as we know, mental illness runs in families. We’re treating it as a medical condition and we’re looking at it through the lens of science, which is appropriate.

Assistant District Attorney Thomas Minett, who is prosecuting the homicide case, said after the hearing, “it will be important for us to secure the records of any treatment the defendant has received.

“At this point, we’ve focused on the physical facts … and we need the time to acquire all of that further information so we can fully evaluate the case.”

Minett added that there has been no specific discussion with the district attorney about whether this will be treated as a first-degree murder case, but Minett said he will recommend that, “at least until we can get further information.”

The letter from Luckasevic, who conducted Lauri Craven’s autopsy at the Heritage Valley Medical Center in Beaver, was addressed to Minett. The pathologist wrote that the stab wounds she received “caused lethal injury to her neck organs and great vessels in her neck, including the jugular veins and carotid arteries.”

Luckasevic determined that the manner of her death was homicide.

DETAILS OF THAT DAY

Trooper Darren Vizyak testified about how he approached Lauri Craven’s house the day she was killed and first saw Craven on the porch.

“He was covered in blood,” he said, adding that the troopers arrested him. When Vizyak went into the house, he saw the victim lying in a hallway to his left, covered with a blanket. He said he felt her hand and “there was no pulse.”

The state police had received a request from Neshannock Township police, via the 911 center, to take over the investigation, saying that a male had called there and said he had just stabbed his mother to death, Vizyak said.

Guy recounted part of the taped interview with Craven, who said that after stunning his mother was unsuccessful, he had struggled with her and thrown her to the floor. While she was on her back, he straddled her and stabbed her. He told the interviewers that he did not know how many times he stabbed her but said “it was a lot,” Guy said.

At one point Craven realized his mother was still breathing and he put down the screwdriver and strangled her, Guy relayed to the court about Craven’s statement.

He said that according to Craven, the stabbing occurred in the kitchen and he wanted to leave her there so his father would see her when he arrived home from work. Then he later moved her body to the hallway and covered her with a blanket, Guy said.

Guy said Craven recounted how he washed off the screwdriver and knife and left them on the kitchen counter afterward.

He told authorities he had taken the screwdriver, stun gun and an extension cord from his grandparents house that morning, Guy said.

All charges against Dean Richard Craven were held for court after his preliminary hearing this morning in Central Court.

Craven, 27, of 3402 Ellwood Road, was arrested without incident after he allegedly stabbed his mother, 57-year-old Lauri Jean Craven, around 11:50 a.m. Jan. 29 at her 315 Lanewood Drive home in Neshannock Township. She was pronounced dead at the scene by coroner Russell Noga.

A letter from a forensic pathologist presented during today’s hearing indicated that an autopsy performed on Lauri Craven showed she had been stabbed more than 300 times.

Dean Craven’s attorney, David Shrager of Pittsburgh, addressed his client’s mental health status to reporters after the hearing, noting that his problems extended from his childhood.

The News is developing this story and will have a complete report in tomorrow’s print and e-editions.