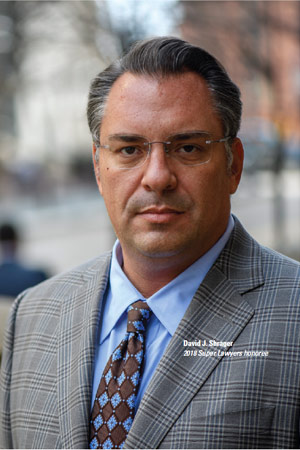 After receiving his law degree with honors, Mr. Shrager was an attorney for the Litigation Department at Reed Smith before joining his family’s law firm. Attorney Shrager is a member of the Allegheny County Bar Association, Pennsylvania Bar Association, National Association of Criminal Defense Lawyers, and the Pennsylvania Association of Criminal Defense Lawyers. He has also been recognized by numerous independent rating agencies such as Super Lawyers® as a top-rated criminal lawyer.

David’s patience and aggressive but calm attitude are tremendous assets — both, when helping clients and when defending a case in front of a judge.

David J. Shrager is adamant that his legal team remains down-to-earth, despite many successes over the years.  Attorney Shrager makes sure that he and his team are always accessible to clients, and will never speak down to them or speak in complicated legalese.

Attorney Shrager was appointed as a Judge of the Pennsylvania Court of Judicial Discipline by the Governor of Pennsylvania for a four-year term (2015 -2019). Most recently (12/2021) he was named President of Amen Corner, a civic organization based in Pittsburgh for the last 150 years.

Don’t Be Scared; Be Prepared!™ Shrager Defense Attorneys in Pittsburgh, PA will attack your criminal charges in order to protect your good name. Have a sound and solid case prepared by David J. Shrager and his legal team so they can fight for your rights.